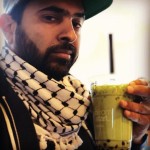 A soft and gentle soul was my first impression of the storekeeper upon entering the convenience store.

I waved and said “Hello” on my way to the back fridge where the 99-cent Razzleberry Peace Iced tea waited for me, grabbed a bag of White Cheddar Smart Pop, and headed back to the register to wait in the short line. The customer at the register was a little short for his purchase. The storekeeper waved it off and said that he’d cover it, and the customer took his stuff and left without a thank you. With no one else behind me, the storekeeper rung me up, and I introduced myself. “Salaams brother, my name is Seemab and I spoke to your son. I wanted to come and see you because I saw what happened. Are you doing OK?”

Earlier, a friend had texted me the video. Due to concerns of retaliation the storekeeper has asked not to be identified. We will call him “Mr. A.” The video shows Mr. A in utter shock and terror as he simultaneously records with a cell phone in his right and yells for help into another phone in his left. He stumbles, dodging food and numerous other items being thrown at him while his attacker, Brian Christopher Miller, hurls a barrage of racial slurs: “Afghan”, “Al-Qaeda”, “Osama” he calls him. Miller, inebriated and full of hate, tosses the heated food display. It bounces off Mr. A and crashes to the floor as he screams in shock and pain. Miller is only ramping up as he yells about being an American and threatens to return to shoot Mr. A in the back. Then he rips the makeshift COVID barrier and the register from the counter. Watching this unfold, I twisted in both anger and agony. I wanted it to stop. I tapped on my screen and was only half-way through.

As Mr. A begs for help from the dispatcher on the phone. He is pelted hard by a beer can and shrieks in pain as he backs into a small office behind him, with Miller now a few feet away and behind the counter. The last few seconds of the video reflects the darkness of the closet he is in, as he holds it closed because it doesn’t lock. With bangs and shouts coming from the other side of the door, Mr. A listens as the sounds of chaos in the storefront die down, but his adrenalin is still pulsing.

As the WOHM crew received this news, our senior editor, Mac Smiff, connected me with Mr. A’s son, who had posted his father’s footage to YouTube. In my first communication with him, it was apparent that he feared for his father’s life and safety. Miller – who had physically assaulted, used hate speech, and threatened to shoot his father – was released the next morning on his “Own Recognizance,” with charges of burglary and mischief. Come to find out, Miller is a regular at the convenience store, coming one to two times a week for a couple of years or so, sometimes “drunk,” but never confrontational. Looking back, Mr. A can now see the recent microaggressions.

His son arrived to meet us an hour into my visit. His stress and worry over his father was obvious. More apparent was his anger with the police.

“He threatened to kill my father, hit him so many times… How could they let him out so fast?!”

Portland Police have a knack for not taking Black and non-Black People of color seriously when it comes to being victims. Often, they will refuse to file hate crime charges and are notorious for underreporting. Take for instance Jeremy Christian, who threatened two Black teenage girls on a Portland Max train in the late spring of 2017. He targeted them because one was wearing hijab. After spewing his expletive-filled words of hate, violence, bigotry and xenophobia, he murdered two men and critically wounded a third who tried to intervene. Yet, Oregon’s archaic hate crime laws at that time (Intimidation 1 & 2) didn’t apply since he acted alone.

Since then, Oregon passed improved hate crime laws in 2019 that changed “intimidation” to “bias crimes” (it’s a felony to attack someone over their protected class), and mandates all law enforcement agencies to report all hate crimes and incidents. As seen last year, there was a sharp increase of hate crimes against Asians and Pacific Islanders in the midst of the pandemic, though it was based on self-reported incidents and not charged or prosecuted.

The idea is not to jail/imprison more and more people. It’s to have a better accounting of the problems like hate and bias, which are either ignored, or approached with the incrementalism of a baby stuck perpetually at the crawling stage. With better data and accounting of hate crimes comes better solutions to racial issues deep seeded in Portland and the state.

Mr. A’s son knows the double standard of “Portland justice” through first-hand experiences too. Hell, anyone who is Black or non-Black PoC knows it in this neighborhood, or any other hood in Portland. The distrust of Portland Police is deep. Let the dispatchers tell it. Portland Police with it’s own racist history, leans towards reinforcing greater protections against accountability, along with it’s love affair of violence with impunity and persecution of those houseless at unforgivable rates. They’ve mastered the art of spin and marionette community leadership as PR strategies. Even going so far as holding an admitted child sexual predator and rapist as a religious leader and advisor in the communities.

Since the death of George Floyd and the calls for justice that preceded it, Mayor Ted Wheeler worried about the lustre of Portland, stating “…I think the more important question is protecting and expanding the brand of this city. That’s probably the mayor’s primary duty.” Yet, the protest against injustice and police brutality was met with greater injustice and police brutality. Trust the brand.

As quickly as I had asked if Mr. A was OK, he said he was doing fine. Though consumed by what had happened almost 24 hours earlier, he was still working away. As we spoke, he discussed being from Afghanistan, spending a few years in Pakistan, and marrying a Punjabi wife. Shortly after marriage, they emigrated here in 1981. Looking at me with curiosity, he asked if I spoke any other languages. When I told him I spoke Urdu, he lit up. He is fluent in Punjabi, Urdu, Farsi and English. After he ran circles around me in Urdu, we proceeded to talk (in English, sadly) about his arrival to this country and the family he and his wife raised since emigrating. He started a business, sold it, and has been helping a friend run this gas station/convenience store since 2011. In that moment he broke eye contact. After a few silent moments of collecting himself, he shared that this week will also be one year since his “beautiful and youngest daughter” suddenly passed away. “I took her (to the hospital) by the feet, and left with her body.”

The aching moment was broken by another patron who was a few dollars short on their purchase. Again, Mr. A waved it off and said he’d cover it, and the customer took his stuff and left, without a thank you.

Each human with a story as unique as a fingerprint. As Portland keeps its nose up high, there’s another Portland deemed unimportant down below. A Tale of Two Cities.

Seemab Hussaini is a dedicated community organizer, an activist, a father of four and the co-founder / vice-chair of the Oregon chapter of the Council of Islamic Relations (CAIR Oregon).