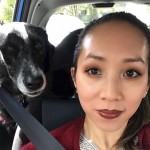 Editor’s Note: Michelle Tran is relatively new to the WOHM staff but has already been an invaluable asset to our team, bringing heightened copy-writing skills, social media prowess, plus her passion for live music and supporting a range of local artists. She’s usually ahead of the curve when it comes to knowing about the best non-mainstream media, so be sure to follow her on Twitter.  Since Concert Buds is a double entendre that includes concert-going buddies, Michelle is a fitting choice to write the first guest post for the column: an accurate retelling of our experience seeing the fabulous and unusual We Buy Gold Tour, with photos contributed by yours truly.

Santigold was slotted to come to Portland over a month ago, but due to a lost voice, had to postpone to this past Tuesday, May 10 at the Crystal Ballroom. I have been a fan since her debut album came in 2008, so waiting another month to see the Banshee Queen for the first time didn’t bother me too much — and I was not disappointed.

Opening for Santi that night was singer Kilo Kish, who’s worked with the likes of The Internet and Chet Faker. The production of her songs reflect that and they have a great experimental R&B vibe to it. I preface with that fact because I can’t say I was super impressed with Kilo’s performance. She played it cool at times during her performance almost to the point of apathy, but also tended to overact with some of her eccentric lyricism. The crowd also seemed lukewarm to her set, but I think we all felt that hey, if Santi thinks she has potential, then it’s cool. I do think a lot of the performance’s shortcomings were due to her lack of a backup band and technical sound issues. Her mic was way too low compared to her backing track and that did not make for a great combo with her already wispy voice.

Santi was able to build up some mystery for a bit in between sets when the crew brought out two amazing sets of inflatable chairs with matching footstools… which then became more confusing when they also laid out jumbo bags of Cheetos Puffs and blue Powerade. Two backup dancers with slicked back buns, sunglasses, and the best Resting Bitch Face emerged and started lounging on their Walmart-chic furniture while munching on their snacks. I was jealous. Santi and the rest of her band then came up on stage in what looked like mafia-esque oversized pinstriped jackets. Suddenly, I felt like I was about to get a deal I couldn’t refuse because she busted out her opening number with “You’ll Find a Way,” and it’s not even the original track, it’s the (superior) Switch remix.

Santi seems to understand that most of her fans aren’t new; they’ve been with her from the get-go and it’s evidenced by how diverse her set list is. The tour wasn’t just about promoting 99 cents—it showcased all of her work. She went on through the night performing old favorites like “L.E.S. Artistes,” “Unstoppable,” and “Disparate Youth” with smatterings of the best of 99 cents including “Banshee,” “Chasing Shadows,” and “Big Boss Big Time Business.” However, my personal highlight was her inviting some of the crowd to come up and dance with her. I just happened to be at the right place at the right time, because she managed to point her finger right at me. Of course, the song we dance to is my all time personal favorite, “Creator,” a hyped up track that’s guaranteed to get you through any workout.

One of the best things about Santigold’s entire set was her stage setup, including her backup dancers. Again, they barely broke a sweat and had the choreo on lock for every song. They didn’t even dare breathe with their mouth open. They even coordinated with Santi’s frequent costume changes, wearing unitards that matched her strapless dress which was adorned with fake logos from her song names and looked like a radio red carpet backdrop–which I think was precisely the aesthetic she was going for since she had the crew literally roll up a red carpet as she sang and danced to “Rendezvous Girl.”

Her use of props went past the inflatable sofas; she brought out batons, shot out bubbles, and pushed out shopping carts to add to her ’99c’ theme. Her background projections consisted of old school nostalgia like the Motorola Razr, and traditional piñatas moving around like some sort of Windows 98 screensaver and what looks like surveillance footage at a grocery store.

Any of these aspects of her show alone may seem a bit strange, but altogether it makes perfect sense for Santi. Every number had been meticulously planned and as a result, it didn’t just feel like a musical performance. It was theater.