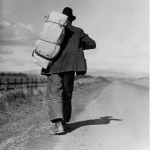 So I just want to let y’all know that I’m a cheap mother f***er. I don’t buy new music. The last album I bought at a record store was Kurt Vile’s “B’lieve I’m Goin Down.” I buy my clothes and sneakers at thrift stores. My main splurge is typically a bag of weed on a Friday.

Thank God for the internet. Oh, and I’m super bias. My friend Spencer aka Cee Goods just released his 6 track instrumental journal called “ROOTS” with Mr. Crates. I’m going to play it as many times on his Bandcamp site as I can until it tells me time’s up. Then I’m going to roll him a joint and ask if I can get a CD-R.

Peep the letter he wrote before you listen to this project. From what I understand, this album is based on the music that Quincy Jones made for the movie ROOTS. King Leez (who has something in the works with Cee Goods, from what I hear) just told me they chopped off Kunta’s foot because he tried to escape slavery too many times.

Cee Goods just moved back to Portland after a couple year hiatus in Los Angeles. From what he tells me, he had a great time of evolution and growth but Portland is always home. I feel the same way. I tried California for 5 years and there’s nothing, no place like Portland.

The album is slim at only 6 tracks. It left me wanting more. It left me dehydrated and alone because I thought the bass lines and drums were going to save my life. They almost did, but not quite. Anyways, if you’re an aspiring rapper, or if you just love music with heart and passion, this project is for you. If you’re not as cheap and/or broke as me, you can listen to it before you purchase it for only $5.

I consider Cee Goods to be my friend. So when I tell you this is his best shit yet, or that you need to hear it; understand where I’m coming from. My favorite tracks are the ones abbreviated. “R.O.P (Rites of Passage)” and “L.B.C. (Live By Character)” really stand out.

This is the type of music that makes you reflect and think about the things that are important to you. What yo want. What you need. And this guy didn’t say any words on this album. Let the music speak. Just listen.