LOL, BRB and the Shorthand of Texting and Dating 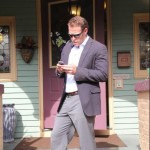 The thing is, I don’t like talking on the phone. I’m on the phone for hours every day as part of my job, so the last thing I want to do when I switch out of work mode is to get back on the phone.

Ladies, it’s not personal. And I know that poking, tweeting, texting and sexting aren’t acceptable substitutes for good old direct interaction. That was the basis of last week’s column, but while cyberspace shouldn’t replace all direct communication, it should sure as shit replace the check-in call–at least 75% of the time.

Says Huffington Post dating columnist Gena Grish: “We enjoy the sense of emotion conveyed through verbal communication, and texts are very emotionless. Calling a woman tells her that you think she’s important, you care how her day was, and you simply want to hear her voice. While texting is an efficient and easy way to communicate, calling requires more commitment, focus and thought.”

So there you have it.

And while texting can be a nice complement to the phone, it’s not a perfect medium by any means. For starters, those goddamn acronyms: LOL, BRB, ROFL and the rest of ‘em. Any time I see one of those English language bastardizations in a text, I lose just a little bit of respect for her on the spot. I’m not trying to be judgmental, but I can’t help myself. It’s like fingernails on a chalkboard for my eyeballs.

But since texting is now part of dating, here are some suggestions you might want to follow:

–          Don’t overthink. This one’s the hardest, because we all have different texting patterns – I reply as soon as I see a text (that’s kind of the point, no?). But many of the women in my life don’t. I’ve had to learn to not let this drive me insane. I’m not quite there.

There are other “rules” and guidelines, but I’ve found the most success by breaking all of them. Being a contrarian and not giving a shit about the rules is just how I roll, and I count on it being a breath of fresh air for whomever I’m involved with, or acting as a nice filter to weed out potential un-datables.

That’s all I got, so until next week, BRB. #LOL