Sleep is the short one…in every picture he’s ever taken.

Matt Kenitzer started Someone Clothing in 2006 while working at Exit Real World, a skate shop in Salem, with a stack of t-shirts and a $500 one color print press.

Kenitzer decided to turn the company into self employment and partnered up with Sleep of Oldominion and Chicharones in the Spring of 2007.

“I was up in Portland at a Glu concert. They were the first sponsors on the Someone Team. But I was at the show giving a bunch of shirts away, basically just trying to get the name out there. Sleep had come by the show and we started talking afterwards. He said that he really loved the stuff and thought he could help out. We just started talking from there, became friends and ended up becoming business partners.” Kenitzer continued, “He’s been a huge help, as far as ideas and networking the resources he has.”

Kenitzer also stays busy doing print press work for various clients and has his attention set on a new project he is starting called the Piece by Piece missions.

“Every month we give back 25% of our profit to different charities.” He said, “Its super tough trying to do something like that but I’ve always wanted to help people out as much as I could. I’m still just month to month grinding it out in my personal life. But I’m trying to help other people make a better situation for themselves. There are a lot of people in a lot of bad situations right now, especially with the economy the way it is.”

The Piece by Piece mission, www.piecebypiecemission.com, is an art focused apparel company that makes bags, purses, computer cases out of painted canvas. Kenitzer is also making hand painted skateboards for the company and is developing a sweatshirt line with hidden pockets, aimed towards streets artists.

“I think that if I’m able to make (the products) the way that they’re designed to be made, people will really love them. Because it’s a functional original piece of art. I had a couple of different people make some prototypes for me and they looked good, especially for just being the first prototypes. So I got excited and started working more and more on it.” He continued, “We’re really trying to get everything locked down so we can start launching the brand.”

Kenitzer is hoping his Kickstarted campaign will help him get the funding needed to start the company properly.

“Kickstarter is kind of hard. I didn’t realize it at first, but it’s really all about your network. I thought it was going to be more about people on the site looking for different projects to get behind.”

You can catch some of Matt’s artwork at the Roundtree Gallery in Salem. The show will be up throughout the rest of April.

Visit Someone Clothing at www.someoneclothing.com. 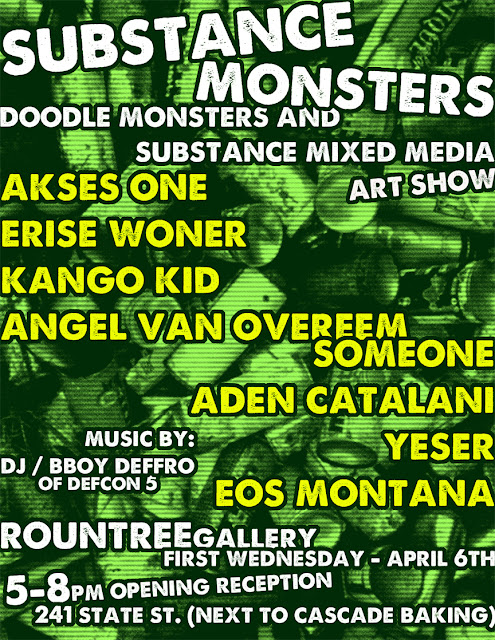 Related Stories:
>>7 Questions with JonezyArtwork
>>Shawna X, tanQ, and a Benefit for Japan