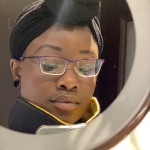 Quite a lot happens within the first minute of the visual.

It starts out cinematically. A faint radio broadcast bursts out of the black frame, then fades out faster than it rushed in. There is a quick flash of tribal like imagery, then a pair of sneakers is shown hanging over a powerline. The solemn setting is right outside of a grandiose church.

Each scene is in black and white.

Accompanied by drawn out organ chords, a choir begins to sing. The voices filter in timidly.

The church steeple stands stark against the clouds, looming over surrounding buildings. Birds fly high in the distant sky and the wind grabs ahold of our ears. We take a tour inside of the church and behold the intricate stained-glass surfaces. Wall statues and crucifix crosses adorn the walls of worship. The choir is louder now.

“Jesus is my light…”

Abruptly, we are pushed back outside. A gunshot pierces through the frame and the scene takes on color for the first time. As the choir fades out, we see an aerial view of a Black man sprawled out in the street, lifeless. Dismal chords creep in and take on a melancholy mood. We see city scenes, a slow rolling train, and…

I turned it off.

I was less than 60 seconds into the video. And I turned it off.

Rasheed Jamal had not even delivered his first verse, let alone the first word of the song. And I turned it off.

I turned it off because I was triggered.
Because I heard a gunshot.
Because another Black man down.

I turned it off because I was tired of terror, I had no more patience for pain, and I was done with death.

I turned it off because… I felt it.
But if you don’t feel it, what is the point, right?

It is the year 2020 and mainstream media has steadily fed us a distorted dinner since before we even had teeth to chew. There is no starter course. The entrée is Black trauma and there are no sides. For dessert, you get a choice: a Misrepresented Milkshake or Teardown Tiramisu.

Those who continue to consume have been desensitized and mislead, most times unknowingly. Those who eat elsewhere… Well, we can still hear it. We can still see it. And we can still feel it.

Directed by Seena M. Haddad and shot by Mohammed Alkhadher, “Urban Decay Pt. II” is just that. It is beautiful, bold, Black expression. And though the scenes are fictional, it feels so real. This authentic expression, straight from the source, is what we should consume.

Rasheed Jamal has been expressing himself through hismusic for years and years. If you take a trip back in time and explore his early releases, you may think he was ahead of his time. You may think some of the music was made after the public killing of George Floyd, or the recent protests that occurred afterwards.

It’s not exactly that. This song and its visual was released prior to any of that. You see, the narrative has been the same, but the world is just starting to listen. There are layers to this narrative. And we haven’t even peeled back the first one.

Needless to say, I returned to “Urban Decay Pt. II” a few days later. I pressed play, and this time I watched it from start to finish. And then I watched it again. And again. I continue to return to it every now and then.

The song packs a mighty punch on its own. Even with no visual, the impact is still heard. The emotions are still felt. Rasheed takes the first verse, admitting to vices in a somewhat apologetic tone. Soon after, the hook tumbles out in the form of a pleading prayer. He’s asking for help.

“Forgive me Jesus, I’m falling in pieces, I’m gone off this weed, man I’m caught in my ways. Lend me a hand ’cause I’m blinded to cover my eyes up from problems that got in my way…”

After the hook is repeated a second time, DookDaGenius storms onto the song with determined defiance. Gone is the apologetic tone we heard from Rasheed. Instead, it is replaced with a rebellious spirit that intensifies as the verse ends.

“…I’m making my rounds til they see me runnin! I piss on the crown, a new God is coming!”

From the height that is Dook’s final striking statement, Rasheed takes us back down with his timid tone.

“It’s safe to say I’m not the same, yeah. Scars so large can hide the pain, yeah…” he starts out.

The contrast between the two artists’ offerings represent an internal battle. This battle is brought to life through the strong imagery which triggered me to the point of turning the video off, all within the first 30 seconds.

It may trigger you too, and that is okay.

While the scenes may be fictional in this case, the emotions are not. The expression is not. There is nothing fictional about urban decay, and the cause of the rot is very telling.

We cannot turn a blind eye to this, because it represents reality.

So today, you should press play on Rasheed Jamal’s video, “Urban Decay Pt. II.” I encourage you to watch it all the way through, the first time. Don’t look away, and don’t turn it off.

Hear the words. See the visual. And feel it.
Because if you don’t feel it, what is the point, right?